Many dental works have been developed to improve the appearance of a person's teeth. Tooth whitening treatment is one of them. Patient awareness of options available in changing the color of natural dentition has created an increase public demand of the tooth whitening. It has become one of the faster developing fields of aesthetic dentistry. 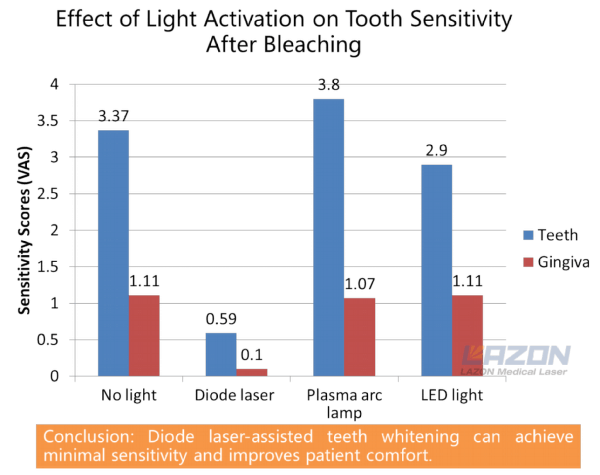 Current techniques involve a broad spectrum approach utilizing hydrogen peroxide (20 – 35 %). The chemical reactions are accelerated by several energy sources which can be delivered to bleaching gel through plasma-arc, halogen lamp and LED lights. Now using laser as an entire new energy sources, combined with corresponding bleaching gels, opened a way to the new millennium. Compared with traditional whitening methods, laser whitening has 3 advantages. Firstly, whitening time is shorter for only 2-3 minutes, much less than 30-45 minutes of LED light bleaching. Secondly, there is lower teeth sensitivity, while LED light whitening has a strong acid swelling reaction. Thirdly, laser tooth whitening has a better effect and can last for longer time. 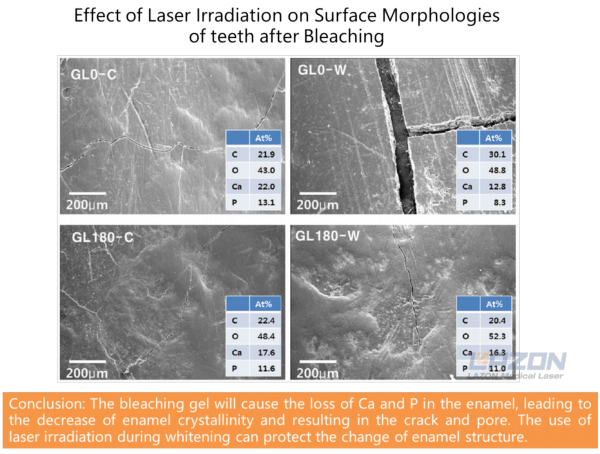 Laser tooth whitening achieves the ultimate power bleaching process without any morphological and chemical changes to enamel and surrounding tissue. The role of laser in teeth whitening is to accelerate the activation of hydrogen peroxide (H2O2) in whitening gels. In reaction to the absorption of laser energy, the hydrogen peroxide breaks down into particle of water and radical of oxygen. The free radical oxygen chemically reduces larger organic-pigmented molecules (the chromophores) in the enamel matrix into smaller, less pigmented constituents by rapid oxidation. At same time laser heating of the bleaching agent will lead to deeper pigment bleaching by increased penetration into the subsurface dentin to enhance whitening effect.