Debridement of the Root Canal System by Diode Laser

Sodium hypochlorite is the main irrigating solution used in endodontics to dissolve organic matter and kill microbes effectively. High concentration sodium hypochlorite (4%) has a better effect than 1 and 2% solutions. EDTA is needed as a final rinse to remove the smear layer. Fluid agitation can enhance the action of irrigants such as sodium hypochlorite and EDTA. This agitation can be done using sonic activation or ultrasonic instruments. Greater cleanliness is achieved when endodontic irrigants are activated during the final irrigation regimen.

One of the variants of this is known as photon-induced photoacoustic streaming (PIPS), which is typically used with sodium hypochlorite. Laser-activated irrigation utilizing PIPS can enhance the disinfection of the root canal system. Because of their strong water absorption, Er:YAG and Er,Cr:YSGG lasers are ideally suited for activating fluids, both through warming them to enhance their chemical actions, and physically agitating them through cavitation actions. 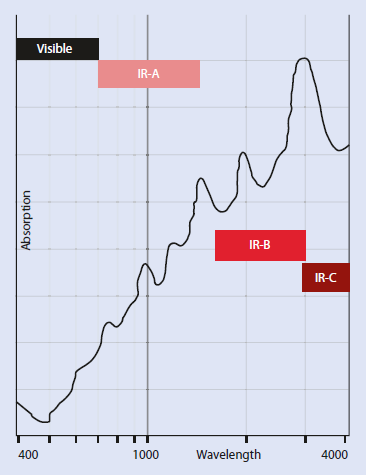 Absorption of pure water in the visible region and adjacent infrared regions.

Diode lasers in the 940–980 nm wavelength range can also be used to generate cavitation, relying on their water absorption. Such lasers are used in pulsed modes, both to optimize the cavitation dynamics and to reduce collateral thermal effects on the roots. Such lasers can then be used with water-based fluids to remove debris and smear layers from the walls of the root canal. For diode lasers, the cavitation effects can be enhanced by supplementing the water with hydrogen peroxide to a final concentration of 3%. Any thermal stresses at the cementum are reduced when irrigation fluids are replaced, which enhances cooling of the root structure.

In a recent study which evaluated the efficiency of EDTAC activation for smear layer removal using a diode laser operated in pulsed mode and delivered by plain fiber tips into 15% EDTAC or 3% hydrogen peroxide, lasing EDTAC was found to considerably improve smear layer removal to a greater extent than lasing into peroxide. Of interest, the diode laser protocol for smear layer removal was more effective than the clinical “gold standard” protocol using EDTAC with sodium hypochlorite (NaOCl). In addition, when using diode lasers, there are additional benefits gained through photothermal disinfection and biostimulation. 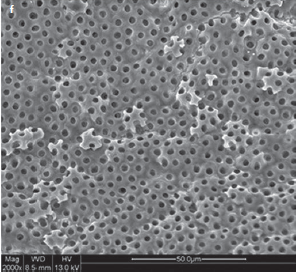 The location after using a conical tip fiber to deliver diode laser energy to activate EDTA irrigant. The laser was applied for 10 cycles of 10 s duration using 80 mJ/pulse at 50 Hz. For details, see Lagemann et al.

Previous：Why buy a dental laser and what do I need to know when I buy it?

Next：Difference Between Laser and Electrosurgery in Dentistry Application