Gingivectomy is a time-honored procedure for removal of gingiva. The indications range from access to esthetics. The gingivectomy can be used when suprabony pockets are present and access to osseous structures is not necessarily important. The procedure assists in decreasing gingival tissue in cases of enlargement and in altering fibrotic gingiva (Figure4-3). However, gingivectomy is contraindicated when (1) access to osseous structure is critical or (2) gingival attachment is inadequate (minimal) or absent. 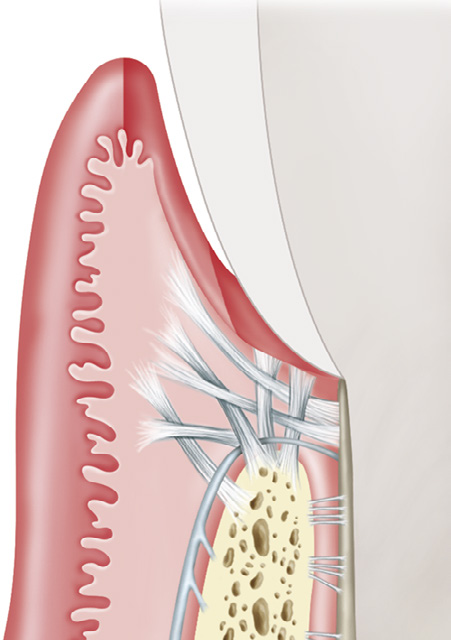 Figure 4-3 Excision versus incision. The excisional gingivectomy incision is created on an external bevel (small arrow). If the bevel cannot be created owing to difficulties with access, the incision can be blended into the apical gingiva using the laser tip. The internal incision (large arrow) also can be created for purposes of the flap procedure. (Modified from Rose LF, Mealey BL: Periodontics: medicine, surgery, and implants, St Louis, 2004, Mosby.)

Clinical observation demonstrates that resecting gingiva with a laser enhances access because of increased visualization resulting from sealing of capillaries and lymphatics during laser irradiation. In the early stage of tissue healing with use of blades, inflammation is noted, along with collagen production and epithelialization, and the wound has a high tensile strength.

The laser wound generally demonstrates delayed epithelialization, collagen production, and inflammation, with a lower tensile strength. In later phases of healing, however, the process accelerates, with collagen production and epithelialization. Myofibroblasts are present in fewer numbers during healing of a laser-resected wound site, which leads to less wound contraction and less scar formation18 (Figure 4-4).

Figure 4-4 Laser gingivectomy for treatment of gingival hyperplasia. A, Presurgical view. B, Ten days after the laser procedure. The cause of the hyperplasia was lack of oral hygiene compliance exacerbated by loading from orthodontic appliances.

Diode lasers demonstrate wound healing that is either comparable with that achieved after use of conventional scalpel blades or somewhat accelerated. Some researchers compared several laser technologies using histologic analysis and determined that wound healing is influenced by certain instrument settings—W, Hz, pulse duration, and time of exposure. It could be concluded, therefore, that wound healing after a flap or a gingivectomy procedure using laser therapy depends as much on device settings as on the actual laser wavelength used. Also, training often is as important as laser wavelength.

An alternative to laser therapy, electrosurgery (especially monopolar devices), does not have a defined target tissue as with laser technology. The primary mode of tissue interaction with electrosurgical instruments is by heat ablation. The zone of necrosis after electrosurgery can be 500 to 1500 μm. Diode lasers can generate heat in tissue at a depth of up to 500 μm. Bipolar electrosurgery units constitute an improvement over monopolar units in that bipolar units generate less lateral heat and can be used in a wet environment.

Treating noninflamed, fibrotic gingiva with diode lasers requires different power settings than for hyperemic or vascular tissue. Lasers are attracted by specific chromophores, so less power is needed to incise tissue if abundant chromophore is present in the tissue. When the gingiva is hyperemic and inflamed, less power is needed because of the high amount of chromophore (hemoglobin) in the tissue. More power is needed to incise fibrotic tissue with less chromophore (hemoglobin) present. The same holds true for gingivectomies in patients with higher melanin content of tissues. Melanin is one of the chromophores of diode lasers. Tissue that is heavily pigmented with melanin requires much less power than gingiva that is very light, coral pink when theses wavelengths are used. It is a mistake to consider that increasing power alone may result in quicker cutting through the target tissue. Lasers generate heat that may result in tissue necrosis from lateral thermal damage. Therefore settings are critical in performing laser therapy.

Initial incisions for gingivectomies are similar to that of using a blade with an external bevel approach. The distance of the incision from the coronal gingival margin is based on pocket depth and amount of existing attached gingiva. A gingival chamfer (beveled edge) is achieved, rather than a direct right angle into the gingiva. Thus the initial cut is made slightly apically to the pocket depth measurement. A slow, unidirectional hand motion is used, moving the tip at an external bevel toward the tooth structure. Caution is necessary in approaching the tooth, especially near root structure, because of the possible laser–hard tissue interaction, which could result in tissue damage. Decreasing the power will prevent such injury; if the power is decreased, however, multiple passes over the incision line may be necessary to complete the cut. Delivering laser energy repeatedly over tissue that has already been treated may result in a greater extent of lateral thermal damage.

Some clinicians use a reflective barrier in the sulcus to prevent the wavelength from interacting with the root. Placing a thin, sterile #7 wax spatula or a small periosteal elevator, or even a piece of metal or mylar matrix band, in the sulcus between the tooth and the soft tissue will prevent any laser energy from damaging the hard tissue; the metal or mylar will reflect the laser energy away from the tooth. Once the gingiva has been excised, power-driven ultrasonic scaling is used to debride the root surface. Because of the sculpting ability of lasers, gingivoplasty can now be performed to smooth the gingival margins for a parabolic appearance. With diode lasers, hemostasis is achieved during the procedure. Whether or not to place a dressing is a matter of clinician preference (Figure 4-5).